Robin Roberts’ peak years just missed the Cy Young Award era. If Baseball had started giving out the award in 1950, Roberts may have taken home a couple.

The Philadelphia Phillies’ right-hander pitched on seven All-Star teams and won at least 20 games six straight years. Roberts played on his last All-Star team in 1956, the inaugural season for the Cy Young Award. (Who won the first Cy Young Award? Remember that the award was given to just one pitcher until 1967.) Actually, that was kind of a dull year for the Phillies’ ace. He finished with a 19-18 record and a 4.45 ERA (83 ERA+).

From 1950 through 1955, Roberts was as good as anybody. He won 138 games, accumulated 46.4 WAR points and finished first in WAR for pitchers every year between 1950 and 1954. (Warren Spahn of the Boston/Milwaukee Braves was the runner-up every season except ‘54. That year, he was fourth.) He led the National League in wins four straight years (1952-55).

Yes, he gave up lots of  home runs (Pitching his home games at Shibe Park didn’t help.), but he didn’t walk anyone. Roberts could pitch and put the ball on the black. Batters didn’t just worry about Roberts’ blazing fastball. They also worried about his curveball and change-up.

If you could go back and vote for N.L. Cy Young awards during Roberts’ prime, it might go like this:

1955 – Roberts, Spahn and the Pittsburg Pirates’ Bob Friend battle it out.

Anyway, Roberts is in the mix every year. If you just give out one award for both leagues, the N.L. guy most likely gets the nod in every case except, maybe, one. Philadelphia A’s lefty Bobby Shantz, all 5-feet-6-inches, 139 pounds of him, put together a huge year in 1952. Good enough to beat Roberts?

You make the call:

Oh, and Shantz won the A.L. MVP. Roberts finished second in the N.L. This one could go either way. It was certainly Shantz’s best season in the big leagues. He accumulated almost half his career WAR points (32.1) in 1952. Well, it would have a great debate in Philly sports writing circles. … Interesting. Maybe Roberts gets four Cy Youngs. Maybe he gets shut out. It depends on what stats you prefer, how you look at ’52 and if you give out just one award or one award for each league.

Ralph Berger wrote a lengthy article about Roberts as part of the Society for American Baseball Research (SABR) biography project. Berger quotes a line that Hugh Brown wrote in a Sport magazine feature on the Springfield, Ill., native. First off, it might be good to know that Roberts earned a bachelor’s degree from Michigan State University and served in the Army Air Corps training program during World War II. He was president of the Gold King Seafood Company in Philadelphia even as a player.

“As athletes go,” Brown writes, “Roberts can safely be called one of the more complex. In conversation, he is at least two IQ notches above most of his compatriots, yet he admits that his intellectual interests are confined mostly to television when he is home and Western movies when he is on the road.” 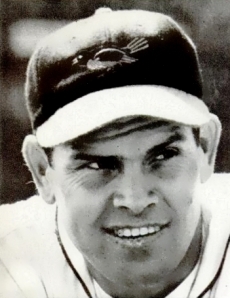 Following a few down years, Roberts enjoyed a solid 1958 season (17-14, 3.24, 6.2 WAR). The Phillies traded their former ace to the Baltimore Orioles after the 1961 campaign. He had a few good years in the American League, went to the Houston Astros and finished up with the Chicago Cubs. His career record was 286-245.

Baseball Writers voted Roberts into the Hall of Fame in 1976. He died in 2010 in Florida. Roberts would have been 88 today. Happy Birthday to one of baseball’s most overlooked pitchers.

Roberts is the only pitcher to beat the Braves in all three cities they have been based: Boston, Milwaukee and Atlanta.

Roberts went to Michigan State on a basketball scholarship. While with the Phillies, he organized the Robin Roberts All-Stars basketball team. The squad played the Harlem Globetrotters, among other teams.