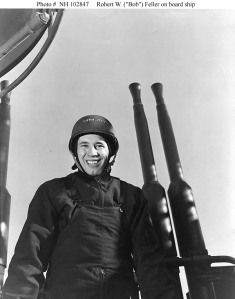 More than 2,400 Americans were killed in the surprise strike. One bomb hit a powder magazine in the U.S.S. Arizona, sending that battleship to the bottom of the harbor, along with more than 1,100 officers and sailors.

Forget baseball. Feller wanted to fight the Japanese and the Germans. He signed up with the Navy on Tuesday, Dec. 9. He gave up the chance to make $100,000 as a baseball player in 1942, Feller wrote in a New York Times column in 2010. He didn’t care.

Feller’s dad, William, lay in a bed back home in Van Meter, terminally ill with cancer. Technically, Feller was exempt from military service. He joined the fight, anyway.

“We were losing that war, and most young men of my generation wanted to help push them back,” Feller said in the Times. “People today don’t understand, but that’s the way we felt in those days. We wanted to join the fighting.”

At that point, Feller had pitched in parts of six seasons in the majors and had compiled a 107-54 won-loss mark. William Feller had raised a ballplayer. He rolled baseballs to his baby boy; young Bobby could hurl a ball 270 feet at the age of nine. He was 16 years old when Cleveland signed him to a contract.

Gene Tunney, the former heavyweight boxing champion, swore Feller into the service at the Chicago courthouse. Navy officials told Feller to report to the training station in Norfolk, Va. The right-hander did some exercising and played on the station baseball team. On June 15, 1942, he pitched in an Army-Navy Relief fundraiser game at the Polo Grounds in New York City. Feller struck out five batters in five innings. But, that wasn’t why he signed up for action. He wanted to go where the shooting was.

Feller entered gunnery school and left aboard the U.S.S. Alabama, a South Dakota-class battleship, in the fall of 1942. The great pitcher fired his guns during a south Pacific battle in 1944 known today as the Great Marianas Turkey Shoot. U.S. forces shot down 474 Japanese planes, sank three enemy carriers and crippled many more support crafts. “We made it look so easy,” Feller said.

The Alabama took part in several other battles, both in the Pacific and the North Atlantic, and was awarded nine battle stars. Chief Petty Officer Feller was aboard for eight of them. Following combat, Feller said, “the dangers of Yankee Stadium seemed trivial.”

Cleveland’s ace enjoyed probably his best season in 1946. He won 26 games and posted a career-low 2.18 ERA. Feller pitched an astonishing 377.1 innings and struck out 348 batters. Before retiring in 1956, he won 266 games and struck out 2,581 batters. The eight-time All-Star led the league in wins six times and in strikeouts seven times. He hurled three no-hitters. Writers voted him into the Hall of Fame in 1962, in his first year on the ballot, with 93.8 percent of the vote.

Feller missed three-plus seasons due to his service in World War II. How many wins did he lose? 80? 90? How many strikeouts? 900? Feller never complained.

“I have no regrets,” he said. “None at all. I did what any American could and should do: serve his country in its time of need.”

The U.S.S. Cooperstown will be a sister ship to the U.S.S. Freedom, pictured here.

Bob Feller signed up to fight in World War II on Dec. 9, 1941, as ships and airplanes lay in wreckage at Pearl Harbor and after more than 2,400 U.S. service men had died.

Feller, already a great pitcher for the Cleveland Indians and a future Hall of Famer, missed three full seasons (1942-45) and part of another (1946) while aboard the U.S.S. Alabama battleship, seeing combat action in the Philippines Sea and elsewhere.

Navy Secretary Ray Mabus saluted Feller, as well as the many other Major League players who served in World War II, during a recent ceremony held at the Baseball Hall of Fame in Cooperstown, N.Y. Mabus also announced that the Navy’s next ship will be christened the U.S.S. Cooperstown.

The Cooperstown will be a Freedom-class littoral combat ship, designed to go close to shore (the littoral zone) and drop off an assault force if needed. A bit smaller than a guided-missile frigate, the Cooperstown will feature a flight deck and hanger for two Seahawk helicopters.

Navy officials plan to use the Cooperstown in several roles, including anti-submarine warfare, reconnaissance, intelligence, logistics and more. Lockheed-Martin will build the 388-foot ship in Wisconsin. The littoral combat ship is a new type of Navy ship, Mabus said.

“These ships will serve our nation for decades,” he said at the ceremony.

Mabus said that 36 future Hall of Famers served in World War II and 64 served in combat altogether, from the Civil War to the Korean War.

Baseball in Cleveland harkens to the days of the Forest Citys of the 1860s. This baffling quiz does not travel quite so far back in time. Major League baseball in the city by Lake Erie began in 1901 with the Cleveland Bluebirds (often shortened to “Blues). By 1902, the Bluebirds had unofficially become the Bronchos (or Broncos). From 1903-14, the team was the Naps. Since 1915, they have been the Indians.

Bob Feller opened the 1940 season with something special.

Opening day, April 16, 1940, Comiskey Park in Chicago. Bob Feller, the bullet-tossing right-hander from little Van Meter, Iowa, takes the mound for the Cleveland Indians. Not surprisingly, a spring wind whips off Lake Michigan and around the park.

Feller, who learned to throw a curveball at the age of eight and who was, according to Ted Williams, “the fastest and best pitcher I ever saw in my career,” doesn’t mind the breeze. This 21-year-old enjoys the greatest opening day ever. The future Hall of Famer throws a no-hitter, the only opening-day no-hitter in baseball history.

“Rapid Robert”, a straight talker, said in a 2010 MLB.com article that he struggled a bit with his control in the early innings against the White Sox. “I was a little wild,” he said, a 91-year-old man looking back at a 70-year-old ballgame.

In fact, the White Sox loaded the bases in the second inning, and Feller walked five batters in the game. But, he struck out eight. His blazing fastball ruled the day. Only about 14,000 fans attended the game; two of them, though, were Feller’s parents. (William Feller had taught his son how to pitch. Supposedly, the family became Methodist after the parish priest scolded Mr. Feller for letting young Robert play baseball on Sundays.)

Feller joked that the season went downhill from opening day. “We lost the pennant by one game to Detroit,” he pointed out.

The Indians ace, though, finished with a career-high 27 wins and a 2.61 ERA. He led the American League in strikeouts for the third straight season (261) and also finished first in games started (37), complete games (31), shutouts (four) and innings pitched (320.1). Only the Detroit Tigers’ Hank Greenberg beat out Feller for MVP.

The Heater from Van Meter, a first ballot Hall of Famer, threw two more no-hitters in his career and insisted that none was better than the one he tossed in 1946 against the New York Yankees. He had to get out Tommy Henrich, Charlie Keller and Joe DiMaggio in the ninth inning on the road.

Even so, throwing a no-hitter on opening day is special. Every team goes into the season with a sense of optimism, a feeling—however fleeting—that this may be the year, no matter what happened last year. Losing streaks may be still to come, but a no-no starts the season right.

Fans wanted to know just how hard Bob Feller could throw a baseball. Could he throw one harder than Walter Johnson? Or “Smokey Joe” Wood?

The Heater from Van Meter, Iowa, really did bring it. In this video clip from 1946, you can see the Indians’ fireballer hurl a pitch at 98.6 mph, as clocked by U.S. Army ordinance equipment typically used to measure artillery shell velocity.

Bob Feller won 266 games in his 18-year career, all with the Cleveland Indians.

But, was it Feller’s best effort? A fairly primitive piece of equipment once clocked the right-hander at a mind-boggling-and nearly impossible–107.6 mph. (Just for comparison, modern machinery recorded Reds’ relief pitcher Aroldis Chapman at 105.1 in 2010. Most people consider Chapman to be today’s top flamethrower.)

In 1940, Feller’s four-seamer took on a Harley-Davidson motorcycle at Lincoln Park in Chicago. Lew Fonseca, a former ballplayer and a producer of baseball instructional films, organized the event. Feller, dressed in a suit and a pair of wingtips, unfurled his fastball moments after the motorcycle flashed by him at 86 mph. The ball tore through a paper bull’s-eye target, about three feet ahead of the Harley.

Fonseca followed up the pitch with some mathematics. He estimated Feller’s heater at 104.5 mph, worthy of the fast lane even on the Autobahn. If accurate, Feller certainly belongs in short company for title of fastest pitcher ever.

Later in life, Feller explained why he accepted the invitation to fire a baseball as hard as he could on a closed-off street in one of our most famous urban parks, a motorcycle barreling past him.

“I was there because we all wanted to know, deep down, who was the fastest of all time,” Feller told Tim Wendel in the 2010 book High Heat: The Secret History of the Fastball and the Improbable Search for the Greatest for the Fastest Pitcher of All Time.

The story of Bob Feller is such a great American tale. He grew up on a farm, learning how to pitch by playing catch with his dad after a hard day’s work. Milking cows and bailing hay built up the arm strength that made Feller, according to Ted Williams, “the fastest and best pitcher I ever saw during my career.”

All fuzzy-cheeked and loose-armed, Feller made his big-league debut as a 17-year-old. He struck out 15 batters in his first start and 17 in his second. As a rookie in 1936, he went 5-3 and punched out 76 hitters in 62 innings. This was how he spent his summer vacation before returning to Van Meter High School for his senior year.

“Rapid Robert” tossed three no-hitters and 12 one-hitters in his career. He led the American League in strikeouts seven times and fanned 2,581 batters, including 348 in 1946. Feller finished with a lifetime won-loss mark of 266-162 and a 3.25 ERA. Cleveland’s greatest pitcher ever, and its fastest, led the league in wins six times and easily made it into the Hall of Fame in 1962, his first year on the ballot, with 93.75 percent of the vote. His total remains the 17th best all-time.

When writing about Feller, it’s always important to note that he missed the 1942-44 seasons, and part of the 1945 season, while serving in the U.S. Navy during World War II. Feller earned eight battle stars as chief of an anti-aircraft gun crew aboard the U.S.S. Alabama.

Feller, who died in 2010, would have turned 96 years old yesterday.