The 1977 major league baseball season began Wednesday, April 6. No player had enjoyed a 50 home-run season since the great Willie Mays blasted 52 in 1965 for the San Francisco Giants.

The 1977 major league baseball season ended Sunday, Oct. 2. Just a few days before that, on Wednesday, Sept. 28, the Cincinnati Reds’ George Foster cracked the 52nd and final homer of his glorious campaign, in the fifth inning off San Diego Padres starter John D’Acquisto.

The lithe, right-handed batter finished fourth in batting average (.320) and fourth in base hits (197). He led the Reds to an 88-74 won-loss record. The Big Red Machine, winners of the World Series in 1975 and ’76, finished in second-place, 10 games behind the Los Angeles Dodgers. To the surprise of almost no one, baseball writers awarded Foster the league’s MVP trophy.

Foster’s strong wrists propelled him to stardom. He whipped a black bat through the hitting zone in record time. Foster usually hit clean-up in the stacked Cincinnati batting order, between Joe Morgan and Johnny Bench.

Foster pounded baseballs for several seasons. It took a while for his career to get going, though. Still, he ended up with 10 seasons of hitting 20 or more home runs and seven seasons with at least 90 RBI.

Born Dec. 1, 1948, in Tuscaloosa, Ala., Foster grew up in southern California. The Giants drafted him in the third round out of Leuzinger High School outside Los Angeles. He made his debut with the big club late in 1969 as a 20-year-old. The Giants liked Foster, but they didn’t have any place for him to play, with Mays, Bobby Bonds and Ken Henderson already starting in the outfield.

The Giants finally solved the problem. They made a bad trade. They shipped Foster to the Reds during the 1971 season for shortstop Frank Duffy and pitcher Vern Geishart. Clunk.

In fairness to the San Francisco brass, Foster didn’t exactly turn into an immediate all-star in Cincinnati. He hit 10 homers and batted .234 in 104 games in ’71. Not until 1975 did Foster really get going. He hit 23 homers that season and batted .300 in 134 games. The following year, he smacked 29 and hit .306. Foster also led the N.L with 121 RBI as the Reds cruised to a second-straight world championship. Foster finished runner-up to Joe Morgan in the MVP race.

In 1977, Foster already had pounded 29 homers by the All-Star break. He smashed three homers off the Atlanta Braves on July 14. The left-fielder recorded his 50th home run of the campaign on Sept. 23, off Atlanta’s Buzz Capra. At the time, Foster was just the 10th player to reach that mark.

The writers again voted Foster as the N.L. MVP in 1978. This time, Fosted belted 40 homers, drove in 120 and hit .281 as the Reds once against finished in second place behind the Dodgers.

Following two more solid seasons in a Reds uniform, Foster signed a five-year, $10 million deal with the New York Mets. (That was a big contact back then.) The Mets fans, though, quickly soured on their new prize. Foster hit just 13 home runs in 1982 as he tried to get acquainted with the Big Apple.

He hit 28 the next year and 24 in 1984. It wasn’t enough. The New York fans never took to Foster. The team released him on Aug. 7, just a few months before it won a World Series. The Chicago White Sox claimed Foster on waivers but cut him after just 15 games.

Foster left baseball with 348 lifetime home runs, 1,239 RBI and a .274 batting average. He never gained any traction for election to the Hall of Fame in Cooperstown, N.Y. He was elected into the Cincinnati Reds Hall of Fame in 2003.

Ernie Banks arrived on the north side of Chicago in 1953. He carried a quick bat and hit the stuffing out of National League pitching over his 19-year-career with the Cubs.

The right-handed hitter took home those postseason prizes despite playing on teams that finished a combined 16 games under .500. The Cubs, one of baseball’s early powerhouses, had fallen on hard times. From 1947-59, the team ended up with a losing record in every year but one. (The Cubs finished exactly .500, 77-77, in 1952.)

Not even Banks’ 43 homers could save Chicago in ’57. That year, the Cubs melted down to 62-92, dead last. Banks still finished sixth in the MVP race and made his third All-Star team.

Most shortstops back then focused on defense, hitting singles and running the bases. Banks focused on crushing fastballs and breaking pitches into the seats. He began his pro career in the Negro leagues, just a few years after Jackie Robinson made his debut with the Brooklyn Dodgers in 1947 as the game’s first modern-day African-American player.

Fans quickly took to Banks’ ready smile and plentiful line drives. He offered the perfect tonic for the end of another long Midwest winter.

The Cubs muddled through the 1958 campaign. They finished 72-82, 20 games out of first place. Even so, Banks beat out the Giants’ Willie Mays for MVP. (The Giants finished 80-74, good for third place.) Mays slugged 29 homers and drove in 96 runs while batting .347 and stealing 31 bases. (Banks stole four bases.) Banks earned 16 first-place votes to Mays’s three. Hank Aaron (30, 95, .326), playing for the first-place Milwaukee Braves, wound up third on the final ballot.

The Cubs struggled once again in 1959. They ended up in sixth place with a 74-80 won-loss mark, 13 games behind the pennant-winning Los Angeles Dodgers. Banks finished second in the home-run race and led the league with 143 RBI. He hit .304 (10th in the league) and had a slugging percentage of .596 (sixth).

Banks didn’t win any more MVP awards. He finished fourth in 1960 and in the top 20 four other times in his career. The Cubs struggled most seasons, but Banks rarely lost his enthusiasm for baseball. Even during those cold days and through the Cubs’ losing ways, he didn’t lose sight of his famous declaration: “Let’s play two!” 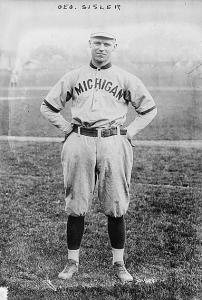 George Sisler played college baseball at the University of Michigan.

The American League created an MVP award in 1922. George Sisler was ready.

Sisler, a first baseman for the St. Louis Browns, put together the finest season of his Hall of Fame career in ’22. The timing worked out great.

Baseball had stopped giving out something called the Chalmers Award in 1914. Hugh Chalmers, the head of Detroit-based Chalmers Automobile, created that honor in 1910 as a way to gain publicity for his company. The Chalmers Award would go to the Major League player who finished with the highest batting average, then considered the game’s most important stat. Sounds simple, right? Well, nothing involving Ty Cobb is ever simple.

Cobb, the great outfielder for the Detroit Tigers, couldn’t shake Napoleon Lajoie, a second baseman for the Cleveland Indians, in 1910. On the final day of the season, Lajoie put down seven bunt hits and added a triple in a doubleheader against the Browns. He went 8-for-8 with a sacrifice.

The story goes that Jack O’Connor didn’t like the ill-tempered Cobb. That was why he stationed his third baseman, Red Corriden, several feet behind the bag in that game. Corriden had no chance to field a bunt and throw out the runner. Even so, A.L. President Ban Johnson declared Cobb the winner in the batting race by a margin of .000860. (Later research indicated that Cobb had incorrectly been awarded two extra hits during that season. Baseball-reference.com lists Lajoie with a .384 batting average in 1910 and Cobb with a .383 mark.)

Chalmers decided to award a car to both players anyway. Over the next four seasons, a Chalmers Award was given to one player in each league who by a vote of baseball writers was determined to be the “most important and useful player to the club and to the league.” The publicity did not match the cost of giving away a free car, however, and the award was dropped after the 1914 campaign.

That brings us to 1922. Hoping to increase fan interest, A.L. executives announced they would hand out an MVP award at season’s end. It would go to “the baseball player who is of the greatest all-around service to his club.”

Sisler, he wrote, “is just as fast, showy, and sensational, very nearly if not quite as good as a natural hitter, as fast in speed of foot, an even better fielder, and gifted with a versatility Cobb himself might envy.”

The Ohio-born product played football, basketball and baseball as a kid. A good student, he left Akron High School and went to the University of Michigan to study engineering. And, as it turns out, to mash fastballs (He batted .445 as a sophomore with the Wolverines and .451 as a junior.)

On this date in 1922, baseball writers voted Sisler as the league’s first MVP. Ruth had muddled through an offseason (31 HR, 96 RBI, .315), made worse by a suspension for playing in illegal offseason exhibition games, and Cobb didn’t beat Sisler in any of the major batting categories (Once a great base stealer, the 35-year-old Georgia Peach finished with just nine thefts.)

Really, Sisler’s toughest competition for MVP probably came from a fellow St. Louis Brown, Ken Williams. The left-fielder led the A.L. in homers (39) and RBI (155) and finished sixth in batting average (.332) in what was by far the best year of his career. He also led the league in total bases (367, 19 more than Sisler) and was second in steals (37). Using more modern stats, Sisler beat Williams in WAR (8.7 to 7.9) and runs created (163 to 146), in large part because of Sisler’s .88 point lead in batting average. The writers made the correct choice.

Sisler missed the 1923 season due to a sinus infection that damaged an optic nerve. He was never the same ballplayer again. He wouldn’t have been eligible for the MVP again, anyway. According to the rules, a player could not win the award twice. Babe Ruth, back in full swing, was the A.L. MVP of 1923.

The National League did not institute an MVP until 1924. Dazzy Vance, ace of the Brooklyn Robins (Dodgers), was the first winner. The modern MVP did not get going until 1931.

Sisler retired following the 1930 season. He left the game with a .340 lifetime batting average. Elected to the Baseball Hall of Fame in 1939, Sisler remains the greatest Brown of all.