What year did Bob Feller hurl his opening-day no-hitter?

The idea behind this quiz is simple. I provide an episode in baseball history. You just need to provide the year that it happened. Bonus points if you guess the correct month and day. The answers are at the bottom. Good luck

2. While chasing a fly ball at Griffith Stadium in Washington, D.C., Babe Ruth runs into a wall of concrete and knocks himself out cold.

4. In one of baseball’s greatest tragedies, New York Yankees pitcher Carl Mays throws a pitch at the Polo Grounds that hits Cleveland Indians shortstop Ray Chapman in the head. Chapman later dies from his injuries.

5. The San Francisco Giants belt five home runs and score 12 runs in the ninth inning to pummel the Cincinnati Reds, 14-0, at Crosley Field.

7. The New York Giants’ Rube Marquard beats Babe Adams and the Pittsburgh Pirates 3-1 in a 21-inning game at Forbes Field in Pittsburgh. Both pitchers go the distance. 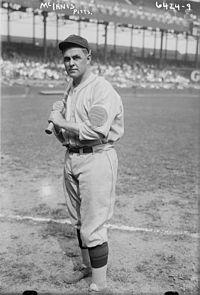 He is the answer to question No. 2.

The Chicago Cubs knocked off the Cleveland Indians about an hour ago to tie the 2016 World Series at a game apiece. This exciting match-up resumes Friday night at Wrigley Field. While you’re waiting, test your knowledge about the Fall Classic. Good luck. You’ll find the answers below.

The Pittsburgh Pirates’ Deacon Phillippe beat Cy Young of the Boston Pilgrims 7-1 on Oct. 1, 1903. The Pilgrims won the Series 5 games to 3.

John Phalen “Stuffy” McInnis played on three World Series winners in the American League (the 1911 and 1913 Philadelphia A’s and the 1918 Boston Red Sox) and one in the National League (the 1925 Pittsburgh Pirates).

The Cardinals were the last N.L. team to get to the Series. It was worth the wait, though. They beat the Yankees in seven games in 1926.

Zero. This was the last time no team hit a homer in the Series. Boston relied on “small ball” and the pitching of Babe Ruth and Carl Mays to beat Chicago in six games,

The Oakland A’s Gene Tenace clobbered home runs in his first at-bats in Game 1 of the 1972 Series against the Cincinnati Reds. (Andruw Jones matched this feat in 1996 for the Atlanta Braves.)

Baltimore pitchers posted a 0.50 ERA. They gave up two earned runs over 36 innings (both runs charged to Dave McNally) and just 17 hits. The Dodgers scored a single run in the second inning of Game 1, one more run in the third inning and were blanked the rest of the way.

On Oct. 10, 1970, at Riverfront Stadium in Cincinnati, the Reds and Orioles played the first World Series game on a field that a horse could not eat.

Enos Slaughter, 40 years and 162 days old, hit a home run for the New York Yankees in Game 3 of the 1956 World Series against the Dodgers.

The Cards’ Ken Boyer hit home runs in games 4 and 7 of the 1964 World Series. Clete Boyer, Ken’s brother, smashed a round-tripper for the Yankees in Game 7.

He is the answer to question No. 4.

Game 1 of the 2016 World Series is going on tonight. The Cleveland Indians lead the Chicago Cubs 3-0 as this post “goes to press.” Test your knowledge of World Series history by taking the quiz below.

The Red Sox’ Tris Speaker caught a shallow fly ball in the ninth inning of Game 7 in 1912 and stepped on second base to double up Giants baserunner Art Wilson.

Bucky Harris, all of 27 years, 11 months, led the Senators to a World Series title as a player-manager in 1924.

The Dodgers’ Kirk Gibson, doing it on one good leg, hit his historic 1988 World Series home run on a 3-2 count off the A’s Dennis Eckersley.

Terry gave up Bill Mazeroski’s Series-ending home run in Game 7 of the 1960 World Series. Two years later, in another Game 7, he threw a pitch that Willie McCovey scorched for a line out to end that Series, this time in favor of New York.

Harry Brecheen won three games for the Cardinals in the 1946 World Series, the first southpaw to reach a trifecta in one Fall Classic.

The New York Giants’ Bill Dahlen stole home in the fifth inning of Game 3 in 1905 against the Philadelphia A’s.

The Sporting News: Take Me Out to the Ballpark

Crosley Field in Cincinnati. Nuxhall, a left-hander from Hamilton, Ohio, pitched in that one lone game in 1944. He went 2/3 of an inning against the St. Louis and gave up five runs, all earned. That was it until 1952, when he came back for the Reds. Nuxhall spent 16 seasons in the majors. He compiled a 135-117 career won-loss record and made two All-Star teams. The Ol’ Left-hander, as some called him, later worked as a beloved Reds broadcaster.

Sportsman’s Park in St. Louis. Cain, a journeyman pitcher for the Browns and other teams, actually got the better of future Hall of Famer Feller in this game. Cain’s Browns beat the Cleveland Indians 1-0. Cain struck out seven, while Feller fanned five

San Diego Stadium. Ray Kroc retired as CEO of the McDonald’s hamburger chain and bought the San Diego Padres in 1974. A stadium crowd of 39,083 supposedly cheered the new owner’s brassy words. The Padres lost that game 9-5 to the Houston Astros and finished in last place in ’74, going 60-102.

Candlestick Park in San Francisco. The ‘stick, since demolished, was famous for its cold winds that whipped up in the evening off San Francisco Bay. Miller, 5-feet-11 and a slender 165 pounds, was called for balk in the ninth inning following the harsh breeze.

Memorial Stadium in Baltimore. Cheney only topped the 100-strikeout mark once time, fanning 147 in 1962. He retired with a 19-29 won-loss record over nine seasons with the Senators and other clubs. The right-hander from Georgia tossed the game of his life on Sept. 12, 1962. He beat the Baltimore Orioles 2-1. No one, before or since, has struck out 21 batters in a major league game.

Braves Field in Boston. Berger, a centerfielder, slugged 242 home runs in 11 seasons and led the American League with 34 in 1935. His grand slam for the Braves on Sept. 30, 1932, against the Philadelphia Phillies, clinched fourth place for Boston, the team’s first finish in the first division since 1921.

Municipal Stadium in Cleveland. Power, one of the early star players from Puerto Rico, played for the Indians from 1958-61. Known as a solid hitter and fancy fielder at first base, Power enjoyed a 12-year career in the majors. He only stole 45 bases in his career and was caught 35 times. On Aug. 14, 1958, Power took his lead off third base in the eighth inning against the Detroit Tigers. He sprinted home and was safe easily. He made his second steal of home in the 10th inning. This time, he slid under catcher Charlie Lau to score the winning run.

Olympic Stadium in Montreal. Stargell belted 475 home runs in his Hall of Fame career, all of it spent with the Pittsburgh Pirates. He hit many titanic shots, including two onto the Dodger Stadium parking lot. His clout in Montreal is considered the longest homer ever hit at Olympic Stadium.

The Polo Grounds in New York. Hubbell, nicknamed The Meal Ticket, won 253 games for the Giants. The left-hander threw a screwball for the Giants and made nine All-Star teams en route to the Hall of Fame. On July 2, 1933, Hubbell essentially pitched two ballgames and beat the St. Louis Cardinals. Hubbell gave up six hits, struck out 12 and didn’t allow a walk. Tex Carleton went 16 innings for the Red Birds. Jesse Haines came on in relief and took the loss.

Wrigley Field in Chicago. The Cardinals and Cubs have played some crazy games through the years, including this one on June 30, 1959. Stan Musial stood at the plate with a 3-1 count. The next pitch evaded Cubs catcher Sammy Taylor and slipped to the backstop. Home plate umpire Vic Delmore called the pitch ball four. The Cubs, though, argued that Musial had foul tipped it. While the argument carried on, an alert Musial dashed for second. Cubs third baseman Alvin Dark grabbed the ball, which by then was in the hands of field announcer Pat Pieper. Umpire Delmore, though, flipped a new ball to catcher Taylor. Pitcher Bob Anderson grabbed the newest baseball and threw it to second base in a failed attempt to get out Musial. That throw ended up in centerfield. Dark, meanwhile, threw the original ball to Cubs shortstop Ernie Banks. By then, Musial was sprinting to third, unaware that Banks had a ball in his hand. The shortstop tagged out Stan. An inevitable delay followed. Finally, Musial was declared out. Not surprisingly, each team played the game under protest. The Cardinals quickly dropped theirs after winning 4-1. Nothing ever came of the Cubs’ protest. Just another day at the old ballpark. 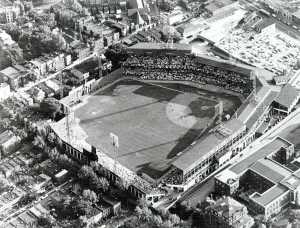 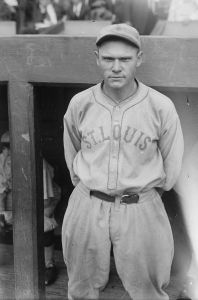 The old Milwaukee Brewers began play in the Western League in the late 19th century. In 1901, they joined the newly formed American League. The following season, the team moved to St. Louis and changed its name to the Browns, the original moniker of the National League’s St. Louis Cardinals.

More often than not, the Browns battled it out for last place in the A.L. “St Louis-first in booze, first in shoes, last in the American League.” The Browns made it to one World Series, in 1944, against the Cardinals. The Cards won the Streetcar Series in six games.

The Browns nearly moved to Los Angeles in 1942, but World War II intervened. They almost moved back to Milwaukee and finally left for Baltimore in 1954. Rechristened the Orioles, the franchise has won six pennants and World Series in 1966, 1970 and 1983.

Good luck with the quiz! 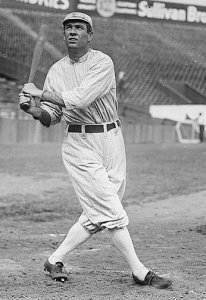 They are the team of The Nation and The Monster. They play in historic Fenway Park, in the same place Cy Young and Babe Ruth played and Ted Williams played and David Ortiz, “Big Papi”, plays today. They were the Boston American first, from 1901-1907, and the Red Sox ever since. They have won 13 pennants and eight World Series titles, most recently in 2013. Good luck with the quiz.

Baseball in Cleveland harkens to the days of the Forest Citys of the 1860s. This baffling quiz does not travel quite so far back in time. Major League baseball in the city by Lake Erie began in 1901 with the Cleveland Bluebirds (often shortened to “Blues). By 1902, the Bluebirds had unofficially become the Bronchos (or Broncos). From 1903-14, the team was the Naps. Since 1915, they have been the Indians.