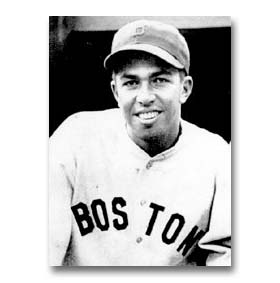 Mel Almada hit .284 in his six-year big-league career with the Red Sox and three other teams.

Mel Almada hated the inside pitch. He knew, just knew, that every fastball fired at his hands, hurled near his shoulders, and, yes, sometimes whipped close to his head, was a pitch thrown with hateful intent.

“They’re throwing at me because I’m Mexican!” Almada insisted, according to a SABR biographical article written by Bill Nowlin.

Melo left his homeland while still a baby. In 1914, Baldomero Sr., a successful businessman, took his family away from the political problems and violence of post-Revolutionary Mexico. The Almadas settled in Los Angeles. Mel and his older brother, Jose Luis (later Americanized to “Louie”), began playing baseball as little boys.

Luis established himself as a star with the Seattle Indians of the Pacific Coast League. After graduating from Los Angeles High School in 1932, Melo went up the coast to join his brother. He batted .311 in his rookie season in the PCL. By 1933, The Sporting News, the famous Bible of baseball, had labeled Mel Almada as maybe “the best young outfield prospect” in the league. That summer, the Red Sox signed him to a contract.

Mel’s big-league career amounted to a mixed bag. He could certainly run and play defense. He hit for a decent average, but he never showed much power. In 1935, for instance, he batted .295 but with a slugging percentage of just .379 (OPS+ 84).

Older brother Luis Almada never made it to the majors. The New York Giants placed him on their major league roster in 1927, but Luis got hurt while on a barnstorming trip with the team and never made it back. He died in  2005 at the age of 98.  Luis had a theory as to why his talented younger brother quit playing in the majors at the age of 26. It was that inside pitching, Luis said. Mel hated it, and opposing pitching knew it. But, the pitchers weren’t throwing at Mel because he was Mexican.

“No, Melo,” Luis once said to his sibling, according to the SABR article. “They’re throwing at you because you’re a batter.”