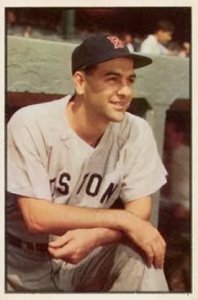 Most famous as a player-manager for the Cleveland Indians, Lou Boudreau led the Boston Red Sox from1952-54.

Well, why not Lou Boudreau?

The Cleveland Indians needed a manager. Team owner Alva Bradley fired skipper Oscar Vitt following the 1940 season, hired Roger Peckinpaugh to replace him and then moved Peckinpaugh to a front-office job after the ’41 campaign.

The Harvey, Ill., native thought about it. So what if he would be the youngest manager in major-league history. “Why not me?” he said to himself, according to Baseball’s Most Valuable Players by George Vescey.

Boudreau was a leader, a natural. At age 13 he helped coach his grammar school basketball team. A few years later, the guard led Thornton High School in suburban Chicago to the Illinois state championship. Boudreau played baseball and basketball at the University of Illinois.

Boudreau called Bradley. “Why not me?” Bradley, shocked, mulled it over. On the one hand, Boudreau had never managed in the majors. Would the players respect a 24-year-old skipper? And how would the pressure of managing a team affect Boudreau’s play in the field? No, this might not be a good idea.

A golf game with 83-year-old George Martin, a member of the Indians’ board of directors, went a long way in changing Bradley’s mind. Heck, Martin said, Lou is the team leader right now. Why not just give him the job. He can do it, Martin insisted.

Bradley called Boudreau. Get on the next train, the owner said. The Indians hired the man who was quickly tabbed by reporters as “The Boy Wonder.”

The team rebounded in 1947 with an 80-74 won-loss record. Even so, owner Bill Veeck, who bought the Indians from Bradley in ’46, thought about making a change in the dugout.

Veeck just wasn’t sure about Boudreau the manager. He told Boudreau exactly that. The player-skipper went into 1948 on the hot seat.

”It was quite a year,” Boudreau recalled, according to The New York Times. ”The pressure kept building and building, until I thought we’d all burst.”

The Indians went on to beat the Boston Braves in six games in the World Series. It was the high point of Boudreau’s managerial career. The skipper led Cleveland for two more seasons and managed the Boston Red Sox (1952-54), Kansas City Athletics (1955-57) and Chicago Cubs (1960) after that. None of his other teams advanced to the playoffs.

He gained some fame, of course, for implementing the Boudreau shift against Red Sox slugger Ted Williams. Boudreau placed all four infielders between first base and second base and moved his center fielder into right field against the left-handed hitter. Williams, always stubborn, kept pulling the ball. “The shift hurt me,” Williams said, according to The New York Times.

The former Wonder Boy spent many years as a broadcaster with the Chicago Cubs. One of his daughters married pitcher and bad boy Denny McLain, baseball’s last 30-game winner. The baseball writers voted Boudreau into the Hall of Fame in 1970. He died in 2001 at the age of 84.