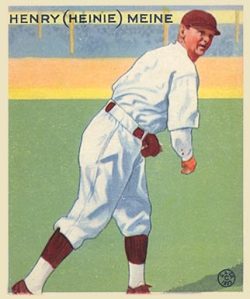 You can hear the crack of the bat and cheers of the crowd at Heine Meine fields in far south St. Louis County. Pitchers grunt as they hurl fastballs toward the hitter, while umpires bark out their calls. You can catch a game here throughout the cool spring days and warm summer nights in the Gateway City.

The complex was named long ago for Henry William “Heine” Meine, the so-called Count of Luxembourg, a former big-league pitcher and the owner of a popular tavern that once stood nearby. Heine also helped found the Lemay Baseball Association.

Heine Meine’s story is worth telling. The ballplayer’s spitball first drew the attention of scouts. Later, he came up with different ways to make his pitches move. He was, as baseball people liked to say, a “junkball” artist. Meine compiled a 66-50 won-loss mark in a major-league career that began in 1922, went on hiatus for several years and picked up again in 1929.

Born May 1, 1896 in St. Louis, to Henry and Louisa Meine, the children of German immigrants, young Henry grew up in the city’s Carondelet neighborhood. The boy grew up with the goal of making his living as a blacksmith, his dad’s profession.

World War II broke out in 1914. The United States entered the action in 1917. Henry Meine Jr. served 22 months in the U.S. Army’s mounted cavalry. He also showed off a special talent to his fellow soldiers. Henry Meine hurled a mean spitball.

Not long after the Great War ended on Nov. 11, 1918, Meine returned to St. Louis and began operating a local tavern. He also played semi-pro baseball. A scout for the St. Louis Browns signed him to a deal in 1921.

Meine didn’t exactly light things up in the minors. He went 8-16 with a 4.68 ERA for the Beaumont, Texas, Exporters, a Class A squad. The Browns promoted him to the big club, anyway.

To make things even tougher on the 26-year-old rookie, spitballs had been outlawed in the big leagues following the 1921 season. (Some pitchers were grandfathered in and allowed to keep throwing the pitch. Burleigh Grimes was the last legal spitballer in the majors.) So, a guy with an 8-16 mark and an 4.68 ERA couldn’t—legally—throw his best pitch.

Appearing in just one game and pitching just four innings. Meine gave up five hits and three runs (two earned, a 4.50 ERA). Over the next several years, Meine toiled in the minors—for teams such as the Syracuse Stars and the Kansas City Blues—and worked on throwing good pitches…dry.

His offseason leading into 1931 included a tonsillectomy. Meine’s first game that year was an unimpressive six-inning effort. He gave up eight hits and five walks. His second start was about the same. Then, something clicked. Meine used a curveball, change-up, good control and guile to put together by far his best year in the majors.

He led the National league with 19 wins (against 13 losses) and started a league-leading 35 games. Meine also topped all pitchers with 284 innings pitched, to go with a 2.98 ERA (fourth in the league). At one point, he tossed five straight complete games. If not for Meine, Pittsburgh 75-79 won-loss record (fifth place) would have been much worse. The pitcher went 4-2 against the eventual World Series winner St. Louis Cardinals, posting a 1.61 ERA in 56 innings.

The irascible Meine wanted a raise for the 1932 campaign. The Pirates said “no,” leading to a holdout and suspension. Meine finally reported to the team in late May, but never got into a groove. He finished 12-9 but with a 3.86 ERA. The next year, he finished 15-8 and recorded a 3.65 ERA. Meine was 37 years old.

Influenza wiped out part of Meine’s 1934 season. He went just 7-6 and retired to St. Louis to run his tavern. The neighborhood was known as “Luxemburg.” Meine was the Count. Meine’s place was a popular joint before, during and after prohibition. A reporter for the Milwaukee Journal wrote that Meine can “juggle a stein of brew just as easily as he can throw a curve ball.”

Later, Meine opened a baseball school for teenage boys and hired former ballplayers to help out. He started the Lemay Baseball Association and ran that with his sons, Howard and Robert. Heine Meine died March 18, 1968, at age 71.