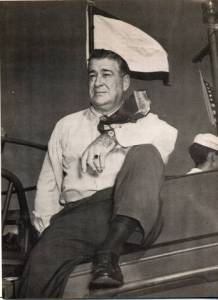 Andrew Higgins patterned his LSVP after a boat he built to maneuver through Gulf Coast swamps.

Andrew Higgins built the boats that won the war.

The rectangular vessels, made mostly of plywood, could haul 36 soldiers from sea to shore. Most measured just more than 36-feet long. Higgins’ company built more than 20,000 of them.

LSVPs met with outstanding reviews. From both sides.

This Higgins boat is carrying troops to Okinawa.

Higgins, a native of land-locked Nebraska, who got thrown out of Omaha’s Creighton Prep High School as a senior for fighting, designed the forerunner of the LSVP during peacetime in 1926. He called it the Eureka boat.

Higgins had gone from Omaha to Mobile, Ala., in 1906 as a 20-year-old to seek his fortune in the Southern lumber business. By age 24, he was managing a German-based import-export lumber company in New Orleans. He founded his own firm, Higgins Lumber and Export Co., in 1922.

In time, competition from tramp steamers, along with a beleaguered world economy, put the Lumber and Export Company out of business. Higgins Industries, the boat-marking arm, kept going. In addition to the Eureka boat, Higgins built tugs, barges, motorboats and other crafts for a variety of clients, including the U.S. Guard.

The Gulf Coast swampland had inspired Higgins. Oil drillers and trappers needed shallow-draft boats to move through murky water filled with fallen trees and alligators. A sort of tunnel underneath the Eureka boat protected the propeller and shaft. The boat could speed through 18 inches of water, run onto land, extract itself and head back into the swamp.

Like so many other people, Higgins knew by the late 1930s that the United States would soon be at war. He also knew that steel would be in short supply and that military leaders might find some use for his wooden boats. With all that in mind, he cornered the entire 1939 mahogany supply from the Philippines and stored it in New Orleans.

Higgins signed up for a competition to design a landing craft suitable for troops and supplies. The Navy cringed. It “wanted no part of this hot-tempered, loud-mouthed Irishman who drank a bottle of whiskey a day,” historian Stephen Ambrose wrote in his book D-Day.

The Irishman, though, said, “There are no officers, whether present in this room or otherwise in the Navy who know a thing about small boat design, construction, or operation—but by God, I do.” Ambrose called Higgins “a genius.”

Marine Corps leaders loved Higgins’ boat. The Navy just shrugged. On May 25, 1942, in Norfolk, Va., Higgins’ boat squared off against a vessel built by the Navy’s Bureau of Ships. Each boat would carry a 30-ton tank across choppy waters. The race wasn’t close. The Bureau’s boat nearly sank. Higgins’ boat sped through with muscle to spare.

By 1943, Andrew Higgins had seven plants and more than 25,000 workers in the first integrated shop in New Orleans. Higgins boats carried more soldiers, sailors and Marines ashore in World War II than every other landing craft combined. (Large troop ships would bring the fighting men as close to shore as possible. The troops would then climb down cargo netting and into the LCVPs. When the ships got to shore, a ramp would open.)

The Higgins boat made it up sand, coral atolls, volcanic ash and rocks and met the enemy. Eisenhower said, “If Higgins had not designed and built those LCVPs, we could never have landed over an open beach. The whole strategy of the war would have been different.”

Higgins and His War-winning Boats by Dwight Jon Zimmerman