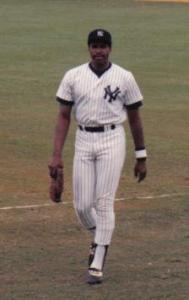 The description “all-around athlete” gets bandied about by coaches, broadcasters and writers. Dave Winfield certainly fit that compliment. Four teams in three different sports drafted him out of the University of Minnesota.

The San Diego Padres selected Winfield in the first round—fourth overall—in the 1973 MLB draft. The Atlanta Hawks of the NBA and the Utah Stars of the ABA also drafted him. Meanwhile, the Minnesota Vikings chose him in the 17th round of the NFL draft. Keep in mind that Winfield did not play football in either high school or college.

In addition, he collected 1,093 extra-base hits, 223 stolen bases and seven Gold Gloves. The graduate of Central High School in St. Paul made 12 All-Star teams and played on a Word Series winner.

Winfield, with that strong frame, looked menacing at the plate, wielding a quick bat that knocked even the best fastball into the seats, or, more menacingly, on a sharp line, rushing toward fielders at eye level.

He ran hard and slid hard. He also threw hard from his spot in right field (168 outfield assists). Once, while warming up before a game at Toronto’s Exhibition Stadium in 1983, Winfield hurled a ball that killed a seagull. Police arrested him for animal cruelty. (Prosecutors latter dropped the charges. The birds were warned.)

Over his eight seasons for mostly losing San Diego teams, Winfield enjoyed several solid campaigns. He made four All-Star squads and posted his best numbers in 1979. The Padres finished 84-78 that year, the first time they ever ended with a .500 record. Winfield ripped 34 home runs, drove in a National League-high 118 and batted .308 (.395 on-base percentage and .558 slugging percentage). He also led the league in OPS+ (166) and total bases (333). He finished third in the N.L. MVP balloting.

On the minus side, the Bronx Bombers didn’t win a World Series with Winfield. In fact, they only went to the postseason one time, in 1981. That year, Winfield batted just .045 (1-for-22) in the World Series against the eventual winner, the Los Angeles Dodgers. He famously asked for the ball when he finally did get a knock. Yankees owner George Steinbrenner was not amused. He referenced Reggie Jackson, his star from the 1977-78 World Series teams. Jackson was Mr. October. “Winfield is Mr. May,” the Boss said. Winfield was not amused.

The Steinbrenner-Winfield feud turned nasty. Steinbrenner was accused of hiring an organized crime figure to dig up dirt on Winfield and the player’s charitable foundation. MLB banned the Boss from baseball for life and then lifted the suspension after two years.

Winfield ended up playing nine seasons in the Bronx. (He missed the entire 1989 season due to a back injury.) The Yanks traded him to the California Angels during the 1990 season. He enjoyed a couple of solid years in southern California and hit 28 home runs in 1991. 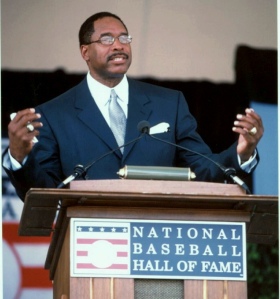 Winfield speaks at his Hall of Fame induction ceremony in 2001./Mario Casciano photo

In 1992, Winfield left for Toronto where he hit .290 and slammed 26 home runs with 108 RBI. He played on the World Series champion Blue Jay squad that year. Once again, Winfield struggled a bit in the playoffs. He hit just .250 in the ALCS against the Oakland A’s, but he did knock two home runs. In the World Series, he hit only .227. The personal numbers didn’t really matter, though. Winning a championship did.

“I’ve been thinking of this,” Winfield said to Sports Illustrated. “If my career had ended (before Toronto), I wouldn’t have been really happy with what baseball had dealt me. I would have had no fulfillment, no sense of equity, no fairness. I feel a whole lot better now about the way things have turned out.”

Winfield played the 1993 and ’94 seasons for his hometown Minnesota Twins and spent his final year in baseball with the Cleveland Indians in 1995.

The writers elected Winfield to the Hall of Fame on the first ballot in 2001 with 84.5 percent of the vote. He and his wife, Tanya, live in the Bel Air section of Los Angeles. Winfield has hosted a radio show, served as a spokesman for the United Negro College Fund and other organizations and is in demand as a motivational speaker.