I recently spoke to Doug Wilson about baseball during this decade of the flashy Oakland A’s and the powerful Big Red Machine. Wilson works as an ophthalmologist by day and still finds time to write best-selling baseball books in his spare time. He has profiled the late Cincinnati Reds manager Fred Hutchinson, Baltimore Orioles Hall of Fame third baseman Brooks Robinson, pitching phenom Mark “The Bird” Fidrych and iconic catcher Carlton Fisk.

Doug is a member of the Society for American Baseball Research (SABR has spoken at the National Baseball Hall of Fame in Cooperstown, N.Y. He and his wife, Kathy, have raised three children and live in Columbus, Ind. Visit Wilson’s web site at www.dougwilsonbaseball.blogspot.com.

Why was baseball in the 1970s a special time? 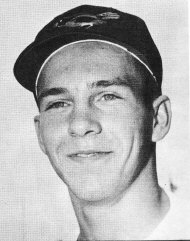 The Orioles’ Brooks Robinson dazzled baseball fans with his great defensive play in the 1970 World Series. Here he is as a young player in 1953.

Well, for me, that was the time when I really began paying attention to baseball. Nothing is ever as good as it was when you were 10, 12 years old, but it was also a really interesting time in the game. It was the last decade before things really changed. You could build really good teams through good trades and through your farm system. Everything didn’t revolve around money.

They really changed America’s perception of our society. They transcended the game. Both were men of fierce determination and pride. They used their success on the field as a springboard to help people.

They did it with a colorful owner (Charlie O. Finley) and entertaining players like Reggie Jackson, Vida Blue, Catfish Hunter and Rollie Fingers. They were mostly a home-grown team.

They had hitting, power, speed, defense and pitching. Most of their players came up through their system following some great drafts in the 1960s. Owner Charlie Finley kept things interesting off the field. Yeah, he had some hokey ideas and sometimes had a tendency to say the wrong thing, but I think people don’t give him enough credit for taking a moribund franchise—what was essentially being used as a feeder system for the Yankees when the team was in Kansas City—and turning it into a winner in Oakland. He obviously had some baseball sense. The A’s ruled baseball for three straight years. Of course, you could never put together a team like that and keep it together for three years now because of the economics of the modern game.

You grew up a fan of the Cincinnati Reds during the era of the Big Red Machine. They were a small-market team that won back-to-back World Series (1975-76). 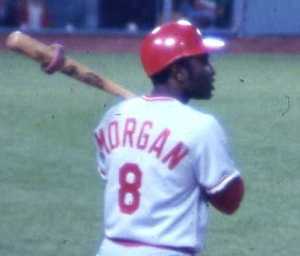 Joe Morgan won back-to-back MVPs in 1975-76 for the Cincinnati Reds. The Big Red Machine won the World Series both seasons.

Yep. They did it with good trades (for Joe Morgan, George Foster and Cesar Geronimo) and with a great farm system that produced Pete Rose, Johnny Bench, Tony Perez, Dave Concepcion and Ken Griffey Jr. They were going to the World Series and drawing 2.5 million fans a year at Riverfront Stadium. Six of the players ended up getting at least 2,000 career hits (Rose, Bench, Perez, Morgan, Concepcion and Griffey) and one guy got close (Foster with 1,925). One through eight, I think it was the best line-up we’ve ever seen in baseball.

And like the A’s, they had an aura about them. They were giants.

Then, they broke up the team.

The management thought they couldn’t afford to pay everyone. It was truly a misguided decision. The general manager (Bob Howsam) and his assistant (Dick Wagner) loathed the new free agency-driven market and were determined to make a stand. I believe that had they given themselves over to learning how to work within the new system, the Reds could have remained great for a number of years. Most of their stars still had quite a few good years left.

They had money (due to the high attendance figures), and more money would have continued to come in had they remained a winner. Tony Perez was the first to go (traded after the 1976 championship). Then, Rose (free agency in 1979), Morgan (free agency in 1980), Foster (traded in 1982) and Griffey (traded in 1982) eventually left. As a fan, it makes you feel helpless. They really didn’t get anything for these guys who were traded. By 1982, they had the worst team in baseball. It’s sad.

Who was your favorite member of the Big Red Machine?

I’d have to say Tony Perez. I liked his personality and his consistency in the middle of the line-up. It was a team of super-sized talent and super-sized egos. Perez was the ultimate team player. He was the glue that held the egos in check. He had a great wit and humor and seemed to know just when to put his arm around someone, when to fire a sarcastic crack, when to kick butt and when to joke. And he continually suppressed his own ego for the sake of the team. He was universally respected, both as a player and as a person. It takes a special personality to pull that off.

Of course, I liked the other guys, too. I don’t think there’s ever been a better catcher than Johnny Bench.

You wrote a book about Mark Fidrych and spotlighted that phenomenal season he enjoyed in 1976 for the Detroit Tigers. What made Fidrych so special? 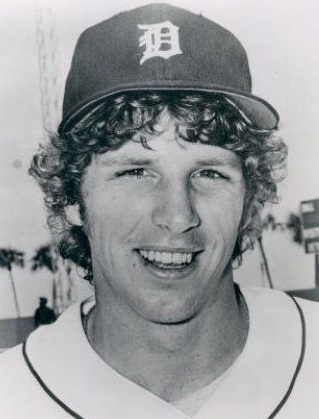 Mark Fidrych compiled a 19-9 won-loss mark during his magical year for the Tigers in 1976.

He was a really good pitcher and just an incredible showman. He had that thick, curly hair, and he liked to talk to the baseball. Everyone was talking about Mark Fidrych and calling him the Bird (for his resemblance to the Sesame Street character Big Bird.). Then, hepitched that Monday night game, and it was a national event. (ABC Monday Night Baseball aired Fidrych’s June 28 start against the New York Yankees. The Tigers won 5-1, and Fidrych tossed a complete game.) He always delivered, and he had such a blast doing it—it was great entertainment. Baseball has never had a drawing card as great as what he did that summer. He filled every stadium he pitched in.

Fidrych went 19-9 with a 2.34 ERA as a 21-year-old rookie in 1976. He was Rookie of the Year in the American League and runner-up to Jim Palmer for the Cy Young award. But, he only pitched four more seasons and finished with a 29-19 career won-loss mark due to arm problems. Was he ever bitter about the way things turned out after that incredible rookie campaign?

I talked to former players who were his friends and with family members. No one ever heard him say anything bitter. If he was bitter, he kept it to himself. He went back home to his small town, bought a farm, married a nice lady and they raised a daughter. He worked as a blue-collar guy driving a dump truck–and he had just as much fun as he did in baseball. He just had a special personality that made everyone feel good just by being around him. He was always gracious to fans, never turned down an autograph request and told reporters he was thankful for the opportunity baseball gave him.

In the middle of the decade, we had one of the great World Series in baseball history. The Reds and the Boston Red Sox played a seven-game series filled with memorable plays.

Baseball needed a boost. Attendance and TV ratings had been falling, fans were sick of hearing about money and agents–and it got that from this Series. Five of the seven games were decided by one run. Two of the games went into extra innings. You had the big catcher’s interference call on Carlton Fisk in Game 3 with Ed Armbrister, Bernie Carbo’s pinch-hit home run in the eighth inning of Game 6 and Fisk’s historic home run in the 12th inning of Game 6. You had great players making great plays. Also, there were the personalities of the guys involved, with Tiant and Bill Lee and Pete Rose. It was great entertainment.

Fisk’s home run set up Game 7, and the Red ultimately won the Series. As a Reds fan, what went through your mind as you saw Fisk hit the home run?

I didn’t particularly enjoy the moment when it happened; let’s just put it that way. Of course, it ended up being OK because the Reds won the next game. And with time, as a baseball fan, you learn to appreciate what it meant and just how special that moment was.

Where do you rank it on baseball’s all-time home-run list?

It’s definitely up there on the very short list of what everyone would consider the greatest all-time home runs. There are really two different kinds of all-time home runs: the milestones, like Maris or Aaron, and the game-ending ones. The game-enders are always more exciting because they’re unexpected. I think most people would put Bobby Thomson, Bill Mazeroski and Kirk Gibson up there with Fisk. As far as which is the best, that depends on personal opinion.

Not only did the Red Sox and the Yankees enjoy a big rivalry in the 1970s. The two catchers, Fisk for Boston and Thurman Munson for New York, were also rivals.

They were both real fiery guys who were leaders on their teams. They were very much alike in personality, played the same position and played for traditional rivals at a time when both teams were very good, and stood in each other’s way. So rivalry and confrontation was inevitable, and it was great for fans. They were also both really good players. Fisk ended up in the Hall of Fame, and you can certainly make a Hall of Fame case for Munson. 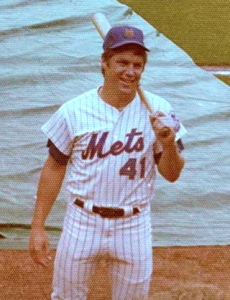 The Mets’ Tom Seaver won two of his three Cy Yong awards during the 1970s. He led the National League in strikeouts five times.

There was also some great pitching during the decade. Who do you think was the best?

I’d go with Tom Seaver. He seemed like he had the best combination of stuff, and he was a winner. Of course, Bob Gibson was still really good in the early part of the decade, and Steve Carlton had some great years, especially in 1972. You’d have to put Palmer in there, too. I’d put Bert Blyleven and Don Sutton a notch below those guys.

George was one of the early winners in the free agency game. He made some good moves and they worked out. But he made a lot of bad moves, like with Don Gullett, Rawly Eastwick, etc. He spent a lot of money on guys who quickly got hurt. By the early ‘80s, his team was a shambles.

(I’ll post the second of my two-part interview with Doug Wilson on Friday.)