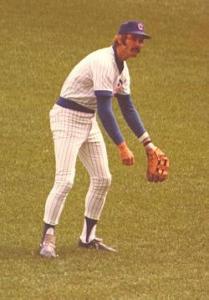 The Chicago Cubs scored six runs in the first inning, three in the fourth and 13 more on May 17, 1979, and still lost.

It could only happen to the Cubs, a wiseacre might say.

That sort of abuse only gets directed toward a team that last celebrated a World Series title in 1908—during the Theodore Roosevelt administration (Mark Twain was still alive, Babe Ruth was 13).

Nearly 15,000 fans at Wrigley Field watched—in shock and awe, assuredly—as the Philadelphia Phillies knocked off the Cubs 23-22 in 10 innings. Before it all ended, the teams combined not just for 45 runs, but for 50 hits, 11 home runs and four errors. The wind, you can bet, was blowing out that day.

Ten players collected at least three hits. Philadelphia shortstop Larry Bowa led the way with five. Dave Kingman slugged three home runs for the Cubs, and Bill Buckner drove in seven, all in a losing cause. Bob Boone knocked in five runs for the Phillies; Pete Rose, Mike Schmidt and Garry Maddux each drove in four.

Only two of the game’s 11 pitchers (Rawly Eastwick for the Phillies, Ray Burris for the Cubs) left this wild affair with an ERA lower than when the day began. They pitched a combined 3.2 innings of shutout ball.

Dennis Lamp started for Chicago; Randy Lerch took the ball for Philadelphia. Both pitchers got an early shower. The Phils scored seven runs in the top of the first. The Cubs countered with six in the bottom half of the inning. Lamp and Lerch recorded one out each. They gave up a total of 11 runs.

By the end of three, the Phillies had taken a 15-6 lead. Even so, a nine-run advantage probably didn’t seem safe that day. And, it wasn’t. The Cubs scored a total of 13 runs in the fourth, fifth and six. Philadelphia added six. Going into the seventh inning, the Phillies led 21-19.

Philadelphia added a run in the top of the seventh—lucky for them–on a Boone single to score Greg Gross. Chicago tied the game with three runs off reliever Ron Reed (torched for a total of six runs and nine hits in 3.1 innings of work). Buckner, Jerry Martin and Barry Foote each ripped RBI singles.

A scoreless ninth inning—the only one of the game—took the game into the 10th. Cubs Manager Herman Franks brought in Bruce Sutter, a future Hall of Famer. Sutter enjoyed one his best years in 1979. He saved 37 games and posted an ERA of 2.22. But on May 17, he gave up Schmidt’s second home run of the game, a solo job with two outs, one of 45 round-trippers the third baseman hit that year. (Schmidt would lead the National League in home runs eight times and blast 548 during his Hall of Fame career. He ended up second to Kingman in ’79. Kong belted 48.)

Phillies skipper Danny Ozark asked Eastwick to go two innings. The former reliever for the Big Red Machine responded. Eastwick went just 3-6 with a 4.90 ERA in ’79. But during this slugfest for the ages, he was without doubt the pitching star. He hurled two perfect innings and struck out one batter. (Even Burris allowed a hit in his 1.2 innings of scoreless work.)

The victory upped Philadelphia’s record to 24-10. The team was looking for its third straight Eastern Division title. In the end, the Phils’ cross-state rival, the Pittsburgh Pirates, won both the division and a World Series title. Philadelphia ended up just 84-78 and finished in fourth place. The next season, though, Philadelphia celebrated its first championship, against the Kansas City Royals.

Chicago dropped to 16-16. They finished 80-82, in fifth place. The Cubs’ quest for their first world championship since beating the Detroit Tigers in ought-eight continued. It  does to this day.

Every year, the anniversary of the 23-22 match-up makes baseball news. The game provided both drama and little bit of farce. “Twenty-two runs, and they still lost.” … Fans shake their heads. Only the Cubs, they say. Only the Cubs.