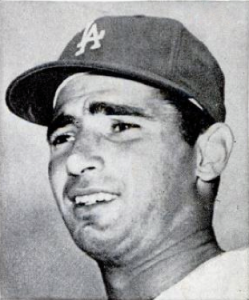 Sandy Koufax breaks through with an MVP season for the Los Angeles Dodgers. The left-hander goes 25-5 with a 1.88 ERA and a career-high 11 shutouts. He strikes out 306 batters and walks only 58 in 311 innings of work. Koufax not only wins the N.L. MVP, he also is the game’s Cy Young Award winner for ’63.

Dodgers outfielder Tommy Davis follows up his great 1962 campaign (27 homers, league-leading 153 RBI and .346 batting average) by hitting .326 and topping the N.L. a second straight season. The Brooklyn-born ballplayer (just like Koufax) finishes eighth in the N.L. MVP voting after finishing third in ’62.

Harmon Killebrew crushes 45 home runs for the Minnesota Twins to lead the American League. “The Killer” (also, Hammerin’ Harmon) , from Payette, Idaho, leads the league six times in homers before retiring with 573.

Cincinnati Reds rookie and hometown boy Pete Rose begins his career 0-for-11. He gets his first hit, a triple, on April 13 off Bob Friend of the Pittsburgh Pirates. Rose retires with 4,256 hits, more than anyone else in major league history. He also wins N.L. Rookie of the Year honors.

Mays’ young teammate and fellow Alabama native, Willie McCovey, blasts the 100th homer of his career on Sept. 5, off the Houston Astros’ Don Nottebart. On Sept. 22, “Stretch” rips three home runs as the Giants knock off the New York Mets 13-4. He finishes the season with 44 homers and ties Hank Aaron of the Milwaukee Braves for the N.L. lead.

Cardinals great Stan Musial gets an RBI single off the Cincinnati Reds’ Jim Maloney in his final MLB at-bat on Sept. 29. The Cards beat the Reds 3-2 in 14 innings.

The Yankees finish the season 104-57 and easily win the A.L. pennant, 10.5 games ahead of the second-place White Sox. The Dodgers end up 99-63 and take the N.L. flag. In a World Series upset, the Dodgers sweep the Yankees for their second championship in L.A. The Dodgers dominate with their starting pitching, led by Koufax, Don Drysdale and Johnny Podres. The Yankees manage just four total runs and hit only .171 as a team.