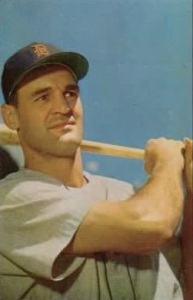 Walt Dropo enjoyed his best season with the Boston Red Sox in 1950. He later played for the Detroit Tigers and other teams.

Walt Dropo stood 6-feet-5 and weighed 220 pounds, a giant of a man in 1950s baseball. Dropo pounded baseballs in the first year of that decade, his rookie season. He looked as solid and as powerful as a brand-new Chevrolet.

Not surprisingly, the writers voted Dropo the A.L. Rookie of the Year. The right-handed hitter finished sixth in the league in the MVP race.

Did the Red Sox have yet another slugger on their hands? Someone to go with Stephens, Bobby Doerr and the great Ted Williams? Not really, as it turns out.

The first baseman never again posted the big-time numbers that he did in 1950. He played 13 years and cranked 152 home runs. He hit .270 lifetime with a .326 on-base percentage and .432 slugging percentage. The one-time All-Star (1950, of course) accumulated 3.5 career oWAR points (baseball-reference.com), 3.1 of them in his first full season.

The Moose, born Jan. 30, 1923, hailed from a family of immigrants. His parents were born in present-day Bosnia and Herzegovina in southeastern Europe. Savo and Mary Dropo settled with their family of five children on a one-acre farm in rural Connecticut. Young Walt milked cows, bailed hay and chopped wood.

The young man grew up big and strong. He earned a football scholarship to the University of Connecticut and also served in World War II. Cpl. Dropo mostly helped rebuild bridges in Europe for the Army Corps of Engineers.

Following the war, Dropo returned to UConn and athletic glory. Finally, he had a choice to make: Play pro baseball or play in the NFL for George Halas and the Chicago Bears. (Halas knew a big, athletic guy when he saw one.) The Red Sox and owner Tom Yawkey offered Dropo a tryout and, after Dropo peppered line drives all over Fenway Park, offered him a fat check. Yawkey’s money beat out Halas’s.

The promising ballplayer broke a wrist in 1951 and was never the same. He hit just .239 that season with 11 homers in 99 games. Dropo played only 37 games for the Red Sox in 1952 before being traded to the Detroit Tigers in a nine-player deal on June 3.

In his 115 games with the Tigers, Dropo slammed 23 homers after hitting six in Boston. That combined total of 29 would be the second-best mark of his career. Dropo drove in 96 runs for the ’53 Tigers and smacked 19 homers for the 1955 Chicago White Sox.

Dropo struggled over the last several years of his career. He hit 13 home run for the White Sox in 1957, the last time he would reach double figures. The Baltimore Orioles released Dropo on May 20, 1961.

In his post-baseball career, Dropo did quite well for himself. He worked in real estate and several other business ventures, including a successful family fireworks company. Moose also made community relations appearances on behalf of the Red Sox.

This is also of note: In part due to his ethnic roots in Serbia, Dropo held a sympathetic spot for minorities in baseball. He was friends with White Sox teammate Minnie Minoso, for instance, and went to a Nat King Cole concert with Larry Doby.

Once, Dropo got into a fight with the St. Louis Cardinals’ Enos Slaughter after Slaughter began race-baiting Doby at Comiskey Park. Big Wally Dropo wrestled Slaughter to the ground and put a quick end to the nastiness.