The Yanks’ Joe Collins hit two home runs in Game 1 of the 1955 World Series against the Dodgers.

The New York Yankees made a habit of sending the Brooklyn Dodgers into fall with a broken heart. 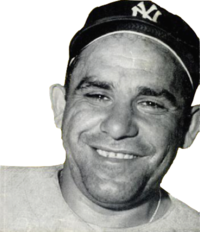 The Dodgers ran away with the National League pennant. They won their first 10 games and started off 20-2. Brooklyn ended the year 98-55, 13.5 games in front of the runner-up Milwaukee Braves. 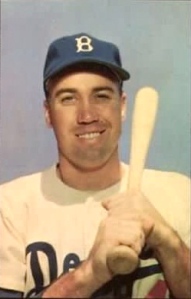 Right-fielder Carl Furillo enjoyed another solid campaign–26 homers, 95 RBI and a .314 batting average. Jackie Robinson, playing mostly at third base, hit just eight home runs in 105 games and batted only .256. He still had a good eye at the plate though, and put up a .378 on-base percentage.

Game 1 of the Series began Sept. 28 at Yankee Stadium in the Bronx. Ford took the ball for the Yanks; Newcombe started for the Dodgers. Brooklyn broke out on top with two runs in the top of the second inning. Furillo hit a lead-off home run to right field. Robinson tripled with one out and scored on a Don Zimmer single.

The Dodger lead lasted only for a few minutes. New York tied the score in the bottom of the second on Elston Howard’s two-run homer. Hey, wasn’t this supposed to be a pitching duel? No one said anything to the Duke of Flatbush. He knocked a Ford pitch into the seats to lead off the top of the third.

Back and forth it went. The Yanks tied the score 3-3 in the bottom of the third. Ford walked and Bauer singled. With one out, Irv Noren singled home Ford.

Jackie Robinson stole home 19 times in his career. He did it once in Game 1 of the 1955 World Series.

Joe Collins put New York ahead 4-3 on a lead-off homer in the fourth. That shot was the third lead-off home run of the day. In fact, of the eight lead-off batters for both teams through the first four innings, six reached safely.

The Yanks grabbed a 6-3 lead in the bottom of the sixth. Berra singled with one out, and Collins followed with a two-run homer, the fifth round-tripper of the game. Collins, a lefty batter from Scranton, Pa., notched 13 home runs in the regular season. He split time between right-field and first base, platooning with the right-handed hitting Skowron. Collins enjoyed his best season in 1952, the year he reached career highs in home runs (18), RBI (59) and batting average (.280).

Brooklyn crept back into the game in the eighth inning. Furillo lined a single to start the rally. With one out, Robinson reached second base safely on an error and Furillo ran to third. Zimmer knocked a sacrifice fly to score Furillo, a.k.a. “Skoonj” (Italian for “snail,” Furillo’s favorite dish). Robinson sprinted ahead 90 feet. Then, No. 42 did what he did 19 times in his career. He stole home.

Pinch-hitter Frank Kellert followed by rapping a single. Jim Gilliam ended the rally with a pop-up to third base. The Yanks hung on to win 6-5.

What was Hilda Chester, famous for clanging her cowbell at Ebbets Field, thinking? Were the Dodgers doomed again? Well, it was just Game 1.