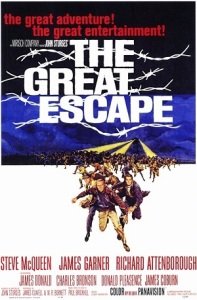 (This one of my occasional non-sports pieces and another one that focuses on World War II.)

Do you remember the first time that you saw Steve McQueen race across the Alpine countryside on a motorcycle pilfered from the German Army? The crackle of enemy machine-gun fire follows him as he speeds toward neutral Switzerland. Just one long, high wall of razor wire separates him from his freedom.

Pass the popcorn. The 1963 hit The Great Escape, directed by John Sturges and based on a book by Paul Brickhill, still ranks as one of the all-time great World War II action movies. United Artists held the U.S. premiere of The Great Escape on July 4, 1963. (London hosted the world premiere on June 20.)

If you like to cheer for the heroes, this is the movie for you. In addition to McQueen, the cast includes Richard Attenborough, Charles Bronson, James Garner and many more familiar names. I remember seeing The Great Escape on television as a kid and right away putting it on my Top 10 list.

You probably recall at least parts of the classic story:

The German High Command, tired of the time and expense of hunting down U.S. and British escapees, unloads the craftiest ones (the “Forger,” the “Scrounger” “the Manufacturer,” “Cooler King” McQueen, etc.) at the new, supposedly escape-proof, Stalag Luft III (located in the German province of Lower Silesia, now Poland.) There, the High Command expects prisoners to sit out the war by gardening and playing sports. Of course, the prisoners decide from the start to make a break for it. They will go over the fence, under the fence and—if need be—through the fence to get back to their units.

The duty of all military officers is to attempt escape, the senior British officer reminds the commandant, Von Luger. The commandant understands this truism. He expects captured soldiers to flee their captors, or to die trying.

A second British officer, Big X, hatches the great escape plan. He arrives at Stalag Luft III in handcuffs. The forbidding SS officer orders Big X—played by Attenborough—not to attempt any more escapes.  Try one more escape, the SS officer hisses, and, if the Gestapo catches you, you will be shot.

Big X brazenly answers this promise of execution. He orders that the prisoners build three escape tunnels—Tom, Dick and Harry. His plan?

Day and night, prisoners shovel dirt in suffocating crawl spaces below the ground. The pieces of lumber that support these tunnels creak and groan underneath the weight of all this earth. The men risk pounds of dirt collapsing onto their heads and burying them in darkness.

German soldiers find two of the tunnels – Tom and Dick – during a Fourth of July celebration. That leaves only Harry. Now, what? “We dig,” Big X orders.

What makes these officers so single-minded about making their great escape? History offers us the quick and clear answer.

Hitler had put a torch to Europe. His Sherman tanks had barreled into freedom. His Messerschmitt airplanes had unloaded bombs onto the innocent.

Citizens fled to the London subway—the Underground—to wait out the German terror.   Fireman ran up and down British streets as soon as the blitzes ended for the evening, putting out the flames.

The Great Escape tells a true story about prisoners of war risking everything to break free and to bring peace back to the world.

Sure, the filmmakers mix in a bit of Hollywood. That motorcycle-aided run for the Swiss border, for example, happened only on screen. Steve McQueen, an enthusiastic cyclist and race car driver, insisted that a motorcycle action scene be added as a condition for his making the movie, and he did most of his own stunts.

But the filmmakers did get most of the important parts right:

The prisoners, including those from the United States, really did work on three escape tunnels and they really did dub the tunnels “Tom,” “Dick” and “Harry.”

Due to miscalculations, “Harry” really did fall 20 feet short, as the movie depicts, and an air raid really did light up the prison during the breakout. Seventy-six men still made it out of the camp.

Tragically, the Gestapo really did execute (against all regulations of the Geneva Convention) 50 recaptured prisoners—including Big X—although not at a rest stop en masse as the movie portrays.

Only a handful of prisoners actually broke out of the camp for good. The movie ends with several recaptured prisoners—the ones not executed—heading back by German gunpoint to Stalag Luft III.

The SS, unhappy about the great escape, escort the commandant from the camp … to suffer a quick fate at the hot end of a Luger, or to suffer a long, cold fate on the Eastern front.

The McQueen character, Capt. Hilts, a pilot, arrives back at camp as the commandant exits. His escape attempt ended in a tangled mess after he skidded into the razor-sharp fence. Hilts heads to the cooler, and a friend tosses him a baseball glove and a ball. Hilts likes to bounce a baseball off the cooler wall to pass the time.

Someday, some way, some how, I imagine popping in my DVD of The Great Escape and watching Hilts evade his pursuers. I picture him soaring over that wall of wire. You see, The Great Escape is more than just a classic war movie with an all-star cast and a cool motorcycle chase.

The movie helps us better understand the important idea of freedom and about the incredible lengths that heroes will go to get back that freedom. The Great Escape is a classic.