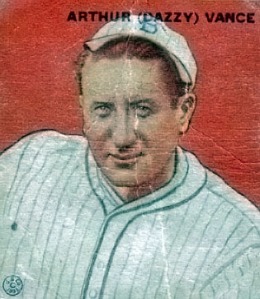 Sadly, the 2015 baseball season is nearing the halfway point. Three more months and the playoffs begin. Following the World Series, we must be content to do, as the great Rogers Hornsby said he did every offseason, stare out the window and wait for spring.

We can, however, take some time now to analyze the 2015 Dazzy Vance Award competition. You’ll recall last year that I instituted this award amid much pomp and circumstance. It is named in honor of Vance, of course, the late, great right-hander for the Brooklyn Robins (forerunner of the Dodgers).

I set up just a few guidelines for this award. The winner must be a starting pitcher, and he must be a National Leaguer. (Vance pitched 2,936.1 innings in the N.L. during his 16-year career. He tossed just 30.1 innings in the A.L. He was a Senior Circuit guy.)

Also, the winner should be someone with Dazzy Vance-type stats. He should be a guy who strikes out a lot of hitters, but who doesn’t walk many. Soft-tossers and wild throwers need not apply.

How ‘bout this year? The top candidates include (in no particular order) Max Scherzer of the Washington Nationals, Gerrit Cole of the Pittsburgh Pirates, Matt Harvey of the New York Mets, Michael Wacha of the St. Louis Cardinals, Shelby Miller of the Atlanta Braves, Cole Hamels of the Philadelphia Phillies, A.J. Burnett of the Pirates (Suddenly, he isn’t walking batters.), Zack Greinke of the Dodgers, and Kershaw, the incumbent.

Recently, Scherzer put up Dazzy-like back-to-back performances. He tossed a one-hitter followed by a no-hitter, just the fourth pitcher to throw back-to-back shutouts while allowing one hit or less. Vance did it in 1925.