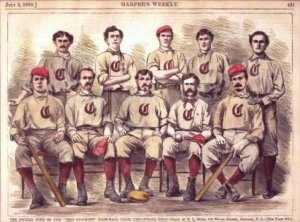 Forget about any other baseball team you may have heard of or read about through the years. That includes the 1927 New York Yankees. None of those teams, not one of them, was as good as the 1869 Cincinnati Red Stockings.

On May 4, 1869, the Red Stockings pummeled the Cincinnati Great Westerns 45-9 in what many call the “first professional baseball game ever.” The Red Stockings went on to compile a 57-0 won-loss record in ’69 against teams in the National Association of Base Ball Players, the forerunner of the National League.

English native Harry Wright organized the Red Stockings, managed them and starred in center field. Born the son of a professional cricket player in 1835, Wright left his homeland at the age of three when his dad took over as head groundskeeper of the old St. George’s Cricket Club in New York City. 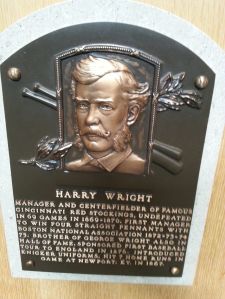 Growing up, Harry played both cricket and baseball. He arrived in Cincinnati in March of 1865, the Civil War winding down to a bloody end back east. Harry Wright took over as head of the fledgling Cincinnati Base Ball Club in 1866.

Right away, Wright began working to turn his team into the game’s first dynasty. He sent invitations to veterans of the famed New York Knickerbockers club and other squads nearby squads, the Midwest being something of a baseball outpost at the time.

In 1869, the National Association Ok’d professionalism. The Red Stockings’ executive board members opened their thick wallets. Some players, including Harry’s brother George, a shortstop, were signed to deals seven times the average man’s wages.

The Red Stockings did not lose until June 14, 1870, in an 8-7 11-inning skirmish against the Brooklyn Atlantics. The club lost six times that year. By November of 1870, though, the Stockings board decided against paying for an team the following season. Those ballplayers were asking for too much money, the board said.

Later, Wright managed several other teams, including the Providence, R.I., Greys and the Philadelphia Quakers, the franchise that would later become the Phillies. His teams won six league championships, and Wright retired with an admirable .581 winning percentage.