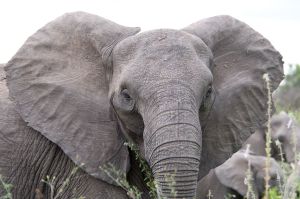 Look fast enough and you’ll notice an elephant figure stitched onto the left sleeve of the Oakland A’s uniform.

New York Giants Manager John McGraw set this design idea in motion more than a century ago. Philadelphia A’s skipper Connie Mack smiled and said “thank you very much”—or something like that.

The A’s elephant story goes back to 1901 and to the team’s first days in Philadelphia. McGraw wanted Baseball to stop skipper Mack and team owner Benjamin Shibe from buying up ballplayers fleeing the National League. The great hitter Napoleon “Nap” Lajoie, for instance, jumped from the Philadelphia Phillies to the brand-new A’s following the 1900 campaign.

Those A’s, McGraw said, they’re a bunch of “white elephants.” Or, as some sources say, McGraw told Mack that the A’s had “a white elephant on their hands.” A white elephant being, in this sense, something that costs more than it’s worth and is difficult to maintain. (The term originated long ago in Thailand, then called Siam. Kings there gave sacred white elephants to royalty in nearby countries. They were nice presents, but a bit impractical, elephants being so large and possessing enormous appetites.)

The A’s quickly adopted the white elephant figure as a mascot. In fact, before the start of the 1905 World Series between the A’s and Giants, Mack gave McGraw his very own stuffed elephant. McGraw, in the spirit of the occasion, accepted the gift.

In 1909, the A’s began wearing an elephant logo on their pre-game sweaters. Nine years later, the elephant made it onto the A’s actual game uniforms. Retired as a mascot in 1963, the pachyderm reappeared in 1988. Known in the mid-1980s as Harry Elephante (Get it?), the mascot now performs under the name of Stomper. And, yes, he works for peanuts.

(Doing research on the elephant and the A’s prompted me to look into the story behind the elephant mascot tradition at the University of Alabama. Here is the short-form version on that one: During at least one game in 1930, the Crimson Tide started their second team. At the beginning of the second quarter, Alabama Coach Wallace Wade ordered his first-team onto the field. Journalist Everett Strupper wrote that he could hear the rumble as the players bounded to their positions. A fan yelled, “Hold your horses, the elephants are coming.” Struper and others began referring to the team as “the Red Elephants.” The reference stuck. You often see elephants on Alabama gear. The name of the mascot is Big Al.)