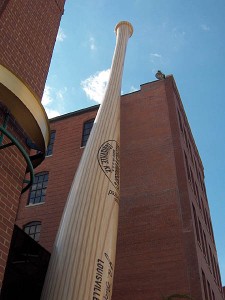 You can’t miss the Louisville Slugger company in downtown Louisville. Just look for the 120-foot-high (68,000 pound) carbon steel bat that stands by the front entrance at 800 West Main St.

The company began as a wood-making shop, founded by German immigrant J. Frederick Hillerich along the Ohio River in 1855. Hillerich’s son, John “Bud,” put the family into the bat-building business in 1884, with some help from Pete “the Gladiator” Browning and his busted piece of lumber. Browning played for the Louisville Eclipse, a.k.a., the Colonels, a major league team. 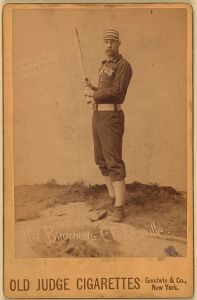 The ballplayer, one of the best hitters in baseball, needed a new bat. Bud brought him to Dad’s shop. J.F. did Browning a favor and crafted the hometown hero a new stick, a bit reluctantly. J.F. wanted to make butter churns and stair railings (even bowling balls), not baseball bats. Money being money, though, the company began offering the Falls City Slugger. Honus Wagner, the great shortstop for the Pittsburgh Pirates, liked the bats so much that he signed an endorsement deal in 1905, the first player to do so.

Bud took over the business in 1894 and renamed the company baseball bat the Louisville Slugger. Frank Bradsby, a sharp salesman, came on in 1916 and was made partner. (The official name of the company is Hillerich and Bradsby. Louisville Slugger is one of the divisions.) Ty Cobb, Babe Ruth and Lou Gehrig began using Slugger bats.

H&B survived a devastating flood along the Ohio River in 1937. Workers rebuilt and got ready for the boom years. During World War II, they made M-I carbine stocks, tank pins and billy clubs, in addition to baseball bats.

Today, H&B turns out about 1.5 million bats every year for players of all levels. That includes 8,000 variations of 300 models. Many of today’s big leaguers still use Louisville Slugger bats. Typically, a player orders about 120 bats for one season. (The company owns 6,500 acres of timberland in New York and Pennsylvania.)

H&B stayed in the Hillerich family for decades. (Bradsby died in 1937, due, may say, to the stress of that year’s flooding.) On Monday, March 23, the company announced it is being sold to Wilson Sporting Goods, based in Helsinki, Finland.

The $70 million cash deal is still pending shareholder approval. Fifty-two employees, a fifth of the workforce, will be let go. Most of the eliminated jobs are in sales. H&B will keep making bats, now for Wilson, a division of Finland’s Amer Sports.

John A. Hillerich IV, the company’s chief executive officer, said his family began looking to sell about 18 months ago. He blamed decreased resources and competition from overseas companies with more money.

“It was not an easy decision, nor one I took lightly,” he said.

H&B plans to keep operating the popular Louisville Slugger Museum. Approximately 220,000 visitors stop by the museum every year, according to the company web site. I have taken the guided factory tour several times and recommend it to any fan. Usually, about a dozen or so people go on each 30-minute behind-the-scenes look at bat making. You can walk on the factory floor and see the bats being meticulously crafted. You’ll hear the buzz from the lathes and watch as the saw dust kicks up. At the end of the tour, everyone gets a free miniature bat.

The museum also incudes plenty of news about some of the game’s great hitters, life-like sculptures of Babe Ruth and Ted Williams, and much more. Check out the web site for details.