The 1888 Boston Beaneaters pose for posterity.

(This is Part III of my three-part report on the Boston-Milwaukee-Atlanta Braves, done in clearly non-linear fashion. Truth is, I’ll be posting something next week that will in effect be Part IV. It will cover some of the franchise relocations that followed the Boston-to-Milwaukee move, as well as the return of major league ball to Suds City.)

It looked like they had at last settled on a good, solid nickname. The Braves, though, turned into the Bees from 1936 through 1940, following a vote by writers and fans. Finally, in 1941, Boston’s National League team settled on the old Braves moniker for good.

Boston fans can argue that their franchise is the longest continuously playing team in U.S. professional sports. The Cincinnati Red Stockings (later, simply the Reds), founded in 1869, sat on the sidelines in 1871. The Chicago Cubs (first, the White Stockings), who began play in 1870, quit for two seasons due to the Great Chicago fire of 1871. 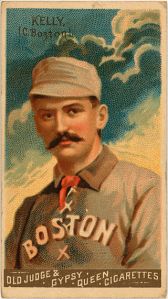 Michael “King” Kelly played with the Beaneaters for three seasons.

The Red Stockings were a charter club in the National Association of Professional Base Ball Players, the forerunner of the National League. Some of the other teams included the Cleveland Forest Citys, the Ft. Wayne, Ind., Kekiongas and the Troy, N.Y., Haymakers. (Great names. And, yes, “Citys” is spelling correctly in this case.)

Boston led the way. Thanks to Harry and George Wright, Albert Spalding (the future sporting goods tycoon) and Ross Barnes, the Red Stockings took home four of the first five National Association championships. In 1876, the Red Caps joined the newly formed National League. (The Red Stockings changed their name to avoid any confusion with the Cincinnati ballclub, also an inaugural National League member.)

Boston won eight pennants before the turn of the century. Frank Selee managed the club for much of that time. Seleee, a New Hampshire guy, knew talent and how to develop it. Later, while managing the Cubs, he put together the famous (Joe) Tinker to (Johnny) Evers to (Frank) Chance combination. His 1898 Boston team finished a dashing 102-47. Sour times were ahead, though.

The Boston Americans (in time, the Red Sox), the team founded to compete in the fledgling American League, spoiled all the fun for the, now, Beaneater ballclub. Several Beaneater players moved over to the Red Sox. Boston’s N.L. team, minus skipper Selee at this point, suffered through mutiple losing seasons and dropped at least 100 games five times. 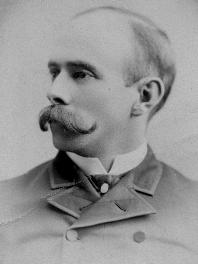 It’s Going to Take a Miracle

In 1914, things turned around a bit for the team that was now, at last, the Braves again. Following another slow start, the club caught fire. Boston is still the only baseball team to win a pennant after looking up from last place on the fourth of July. Joe Connolly led the team in home runs with nine; Walter “Rabbit” Maranville drove in a club-high 78 runs. Pitchers Dick Rudolph and Bill James won 26 games apiece.

Rabbit Maranville led the “Miracles Braves” of 1914. That looks like an awfully big bat that Rabbit is carrying, doesn’t it?

Warren Spahn, a lefty with a big leg kick, helped turn things around for the Braves. Spahn, with an assist from fellow pitcher Johnny Sain, put Boston on the winning path in the late 1940s. This was the era of “Spahn and Sain, then pray for rain.”

In 1948, the Braves made it to another World Series. This time, though, they came out on the losing end. The Cleveland Indians, led by player-manager Lou Boudreau, beat them in six games.

Boston’s highlight reel ended after the Series, save, of course, for the continued great pitching of future Hall of Famer Spahn. Owner Lou Perini watched as his team tumbled in the standings and at the gate. The Braves, who had attracted nearly 1.5 million in 1948, drew fewer than 500,000 in 1951 and not even 300,000 in 1952. Perini wanted out of New England.

Milwaukee would be his savior. At least for a while. It was the first time a major league franchise had moved since the Baltimore Orioles left for the bright lights of New York City. First called the Hilllanders, they became the Yankees in 1913. (And, we know the rest of the story.)

The Braves stayed for 13 seasons in Milwaukee, starting in 1953. They played in front of large crowds during the first half of their tour and much smaller ones in the second half. The team, which won a World Series in 1957, also struggled in the standings near the end.  (See Part I of this report.)

Perini sold his stake, and the new owners left for Atlanta, to Dixie apathy for the longest time, despite the prowess of hard-hitting future Hall of Famers Hank Aaron and Eddie Mathews. (See Part II of this report.)