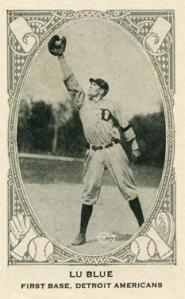 Why waste your time on such a silly game, the uptight Charles Blue liked to ask his son. Learn grammar and arithmetic instead. Memorize the important dates of history and the Periodic Table. But, Luzerne Atwell Blue, “Lu,” kept going to baseball games anyway.

Lu Blue, born on his date in 1897, blew off school more than a few times. He’d head to National Park, home of the Senators and the great young fire-balling pitcher out of Kansas by way of southern California, Walter “Big Train” Johnson.

Corporal punishment awaited Lu. Baseball was a game for ruffians, not for gentleman intent of making something of themselves in this world, Charles Blue lectured his son. He made his point with a paddle. Lu kept going to baseball games anyway.

Fire did in more than a few old wooden baseball homes. On March 17, 1911, it was National Park’s turn. The blaze began in the bleachers and spread from there. Before long, the place was kindling. Opening day was one month away.

But headmaster Sid Lodge was a baseball guy, too. He even played some minor league ball in his youth. And, he could see talent. Briarly had a first baseman. Soon, the scouts were coming around to watch Briarly baseball, but especially Lu Blue.

The Detroit Tigers signed Blue in 1917. He made it to the big club in 1921. Ty Cobb was the team’s player-manager at that point, and how was that going to work out? Cobb certainly had a rap for being a taciturn man, much like Charles Blue.

Lu, though, would later say that Cobb, one of the greatest hitters of all-time, helped him with his swing. In fact, Lu hit .308 as a rookie. The left-handed thrower and switch-hitter went on to play 13 seasons in the majors, seven with the Tigers, three with the St. Louis Browns, two with the Chicago White Sox and one hitless at-bat in 1933 with the Brooklyn Dodgers.

While Lu hit just 44 home runs in his career (a career-high 14 in 1928), he did drive in 695 runs and batted .287 with an admirable .402 on-base percentage, thanks to his patience at the plate. (He topped 100 walks in a season four times.) Lu Blue never led the league in an important statistical category, but he did finish in the top 10 numerous times in several categories. He picked up MVP votes in four campaigns. Baseball historian Bill James rated Blue the 77th best first baseman of all-time in his Historical Baseball Abstract.