(This is the second non-sports article in the history of the Dazzy Vance Chronicles. It is the second article devoted to World War II.)

Guns were blazing and men were dying 70 years ago today on little Iwo Jima island. U.S. and Japanese soldiers were fighting for control of an eight-square mile, sulfur-strewn rock, just a speck in the vast Pacific Ocean.

A primary goal was to capture 545-foot-tall Mount Surabachi, the highest point on the island. It took four days and heavy causalities to do it. On Feb. 23, five Marines, along with a Navy corpsman, raised a 96-inch-by-56-inch United States flag from atop Surabachi. Joe Rosenthal captured the moment forever. 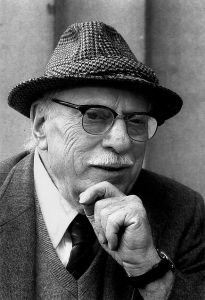 Nancy Wong photo/Joe Rosenthal left AP and spent most of his career with the San Francisco Chronicle. He died in 2006 at age 94.

Rosenthal, a 33-year-old photographer with the Associated Press, had gotten word about an imminent flag raising and rushed to Surabachi, his Speed Graphic press camera in hand. On the summit, he could see one group of Marines taking down a smaller flag and another group getting ready to put up a larger flag. Smartly, Rosenthal focused on the second group.

Lt. Col. Chandler W. Johnson had ordered the flag raising. He wanted a flag “large enough that the men on the other end of the island can see it. It will lift their spirts, also.” Second Lt. Albert T. Tuttle retrieved the flag from an LST 779 beached on the island and gave it to Pvt. 1st Class Rene Gagnon, who promptly headed up the mountain.

Rosenthal stood about 35 feet away on a slope. Just 5-feet-5, he gathered some rocks and a sand bag to stand on. He adjusted his lens setting between f/8 and f/11. He set the speed to 1/400th second and snapped the photo that became an almost instant sensation. The image was shown in Sunday newspapers around the world on Feb. 25, 1945, and was the centerpiece of a war bond drive that raised $26.3 million. Rosenthal, the man rejected by the Army because of bad eyesight, took the most famous photograph of World War II.

The Battle of Iwo Jima, important as part of the allies’ island-hopping campaign, lasted for several more weeks after Rosenthal took his famous photograph. Almost 20,000 Japanese and 7,000 Americans died on the island, including Harlon, Souley and Strank.

The flag itself now is part of the collection of the National Museum of the Marine Corps, in Triangle, Va. Rosenthal’s image, of course, served as the inspiration for Marine Corps War Memorial sculpture. Felix de Weldon sculpted the piece, which was unveiled on Nov. 10, 1954. The piece, with 32-foot-tall figures and a 60-foot-tall flagpole, stands at the entrance of Arlington National Cemetery.

Alan Trachtenberg, author of a book on photojournalism said this about Rosenthal’s famous image: “It’s more than just raising a flag. It’s a sense of culmination, of triumph, not just over an enemy but over the challenge of war itself. It’s become an iconic image, like Uncle Sam.”