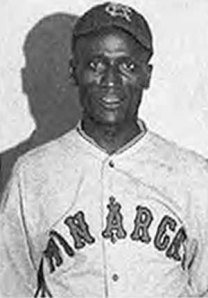 Turkey Stearnes was elected to the Baseball Hall of Fame in 2000.

Supposedly, Norman Stearnes sported a potbelly as a kid. The family thought he looked like a little turkey. Another story is that he ran around the bases kind of funny, flapping his arms.

Either way, we know Norman Thomas Stearnes as “Turkey” Stearnes.

Bill James rated him the 25th best player of all time in his Historical Abstract. Which is great. And kind of a shame.

James rated Frank Robinson the 24th best player and Rickey Henderson the 26th best player. We know a lot about those guys. They’re both African-American, but they competed in the era after integration.

Playing in the Negro Leagues, like Stearnes did, probably didn’t get you onto Page 1 of the sports section in too many mainstream newspapers.

Stearns was born May 8, 1901, in Nashville, Tenn. If baseball had been doing the right thing all along, he would have played alongside immortals like Babe Ruth, Lou Gehrig and Rogers Hornsby.

As it was, Stearnes got a lot less attention and far less money to play with and compete against great players from the Negro Leagues such as Josh Gibson, “Satchell” Paige and “Cool Papa” Bell. He traveled on rickety buses from 1920 to 1940 for teams such as the Detroit Stars, the Kansas City Monarchs, the Philadelphia Stars and the Chicago American Giants.

Do you remember Mark Fydrich? He put together a couple of big years for the Detroit Tigers in the mid-’70s before tearing up his shoulder. People loved him because he had a big smile and a mop of curly hair that made him look a bit like Big Bird of Sesame Street fame.  Fydrich also had a habit of talking to the baseball.

Well, Stearnes did something like that. He liked talking to his bats. He would sit in the dugout or his hotel room and give a pep talk to his 35-ounce Louisville Slugger. Apparently, the bat responded.

This is what we know of Stearnes’ career stats in the Negro Leagues: .344 batting average, 176 home runs and a .621 slugging percentage. He played in 750 games. Stearnes was elected to Baseball’s Hall of Fame in 2000, 21 years after his death.

Like many players from the Negro Leagues, Stearnes’ story gets a little foggy at times. We don’t know that much about him. How many books do we have about Mickey Mantle and Joe DiMaggio? Maybe it’s time for someone to tackle a far tougher project—The Life Story of Turkey Stearnes.